Mustang Circuit Trek is one of the most adventurous treks in Nepal which allows the trekkers to explore the forbidden land of Upper Mustang. Although trekking in the area opened since 1992, several parts of Mustang remain restricted hence protecting the nature and culture of the region in the purest and most pristine forms. For curious travelers, Mustang Circuit Trekking is just the perfect touch of adventure and fun.

Mustang is the combination of beauty and adventure, and you realize this as you trek on its dry, barren yet picture perfect land. Even the small villages where you spend your nights make you speechless with their beauties. The trekking trail that takes you to these villages also takes you to mysterious caves, canyons, and valleys. Side by side the beauties include the paintings that are inside the ancient monasteries situated in the region. Adventure also includes crossing many passes of over 3000 m, and from the top of these passes, superb views of snow-capped mountains and barren hills can be seen. The colorful deserts of Lo-Manthang, walled capital of the former Kingdom of Lo, await you with the quaint traditional Tibetan settlement and offer you a horse-riding journey to the fantastic Chooser Cave. While walking through quiet and solitary paths of Mustang, you encounter authentic culture as you visit the sacred places like Luri Gumba and Muktinath, which give you an insight of the practices of the Hindu and Buddhist people living in the region. Mustang Circuit Trek meets all your expectation of trekking in the wilderness as it shows to you the unique side of Nepal.

With a decade-long experience in travel and tourism, GFT provides you with well-crafted travel packages and put all our body and soul into successfully executing the trips. Our guides are friendly and outgoing and are also trained in first aid, hence allowing you to have a safe and comfortable travel experience. So, for your next vacation in the Himalayan country-Nepal.

Day : 1
Arrival in Kathmandu (1350m) airport and transfer to hotel according to program.

Upon your arrival at Tribhuvan International Airport, we will welcome you and then transport you to your hotel. Overnight in Kathmandu.

From Kathmandu drive to Pokhara whilst enjoying the pleasing countryside view. Driving on the black-topped road Highway, you will pass many settlements and clear streams until reaching the beautiful lake city. As you arrive in Pokhara, you will be transferred to the hotel so that you can rest and freshen up. Later, you can stroll around the lakeside area and enjoy the cool breeze along the bank of Fewa Lake.

Early in the morning, you take a scenic flight through the Kali Gandaki Gorge to reach Jomsom, the headquarters of Manang district and the starting point of this trek. You trace your way along the banks of Kali Gandaki River and ascend through the sand dunes to reach Kagbeni, also known as the gateway to Upper Mustang.

Continuing to follow Kali Gandaki River, you ascend through the dry and barren land to reach the Gurung village of Tangbe, which is adorned with black, white and red Chortens. You make a gradual descend from Tangbe to reach the village of Chhuksang. Throughout the trek, the gorgeous peak of Nilgiri (7061m) keeps you company. O/N in Chhuksang.

Once again, descend to the bank of Kali Gandaki River and then follow the river upstream until reaching the village of Chele. You then leave the river behind and climb steeply to cross the passes of Taklam La (3624m) and Dajori La (3735m), from where you make a short descend to reach the village of Samar. Contrasting with the brownish hills of Samar, the peaks of Nilgiri (7061m) and Annapurna-I (8091m) shine brightly at you.

Today’s trek begins with a steep ascend to reach Zaite. Ascend around Nyi La (4010m) and then descend through the sand dunes to cross a river, from where you ascend once again to cross Ghami La (3765m). The village of Ghami welcomes you with its ancient monastery at the entrance. Thereafter, you cross the longest Mani wall in Mustang and ascend steeply to reach the village of Dhakmar.

The trail from Dhakmar goes steeply uphill to cross Mui La (4170m), from where you descend steeply to reach the age-old Ghar Gumba, revered by the locals of Mustang. You then follow Charang Khola for a short while before ascending through the less traversed trail that takes you to Marang La (4230m). From this high pass, you will be able to catch the views of the Mustang Himal range. Afterward, you descend on an easy trail along the picturesque deserts to reach the fortress city, Lo Manthang. Overnight in Lo Manthang.

Today is an exciting day as you will be exploring the village of Choser on a horse. Situated about half an hour away from Lo-Manthang, one of the tall brown cliffs of Choser houses a 3000 years old cave, which has now been turned into a sacred site. Choser cave has many rooms within and stands out in architecture as well. You can also explore the village of Choser and visit other monasteries in the area before returning to Lo Manthang.

Bidding Lo Manthang a heartfelt goodbye, you ascend to Lo La (3950m) once again. You then trek downhill through impressive deserts to climb another pass, Dhi La (3950m). A steep descend from the pass takes you to Dhi, where you cross Mustang Khola on a bridge and then follow Puyung Khola upstream to reach Yara.

Following Puyung Khola upstream for a while, you reach the ancient Luri Gumba. Perched inside a cave amid an artistic desert cliff, the monastery is adorned with prayer flags on the outside and with Buddhist sculptures and paintings on the inside. After spending some time at the Gumba, you head back to Yara for the overnight stay.

Through the arid and quiet landscape, you make way out of Yara Village as you head towards Tangye. We kindly suggest you to haave enough drinking water and dry foods, cereal bars or something to eat on the way. Simply, we cross Dhechyang Khola and reach a temporary settlement. Afterward, you cross many small streams to finally reach the small village of Tangye. A monastery and a Chorten adorn the beautiful desert village of Tangge.

The trail from Tangye to Chhuksang goes through an abandoned trail and you must always remember to carry enough drinking water and some pack lunch for the day. If you have some Energy bars, Choco-bars, cereal bars or dry fruits, would be very useful. Walking on the ridgeline, the trail goes through many uphill and downhill paths to finally reach the settlement of Chhuksang. A beautiful Mani wall welcomes you back to the Kali Gandaki Valley. Overnight in Chhuksang

Taking the alternate route from the main trail, you make your way through quite desert trails once again. The trail ascends at first to reach Gyu La (4077m), from where amazing views of the Annapurna, Dhaulagiri, and Tukuche ranges can be seen. You then descend steeply to reach the holy site of the Hindus and the Buddhists, Muktinath. Also known as the God of Salvation, a visit to Muktinath and a bath in its 108 water taps is believed to free the pilgrims of their sins. A settlement sits below the temple of Muktinath, where you will be staying for the night.

As you prepare to leave Muktinath, once again you are presented with many paths. You descend through the quieter path dotted with monasteries via Ranipauwa. The trail then takes you to the Thakali village of Lupra where you can visit the ancient Bon Po Monastery. Afterward, you descend to the banks of Kali Gandaki River to follow its trail until reaching Jomsom, the administrative center of Mustang. Overnight in Jomsom.

Day : 16
Fly to Pokhara from Jomsom, Transfer to hotel.

Bidding Mustang goodbye, you take an early morning flight to Pokhara. The scenic flight provides you with amazing views of the hills and the mountains. Upon arrival in Pokhara, you can rest at the hotel for a while and later hire a mountain bike and cycle around the beautiful city. You can also go for boating in the Phewa Lake where the views of the Annapurna massif (8091m) and Machhapuchhre (6997m) peaks accompany you. Overnight in Pokhara.

Today you head back to Kathmandu via a scenic drive along the Prithvi Highway. Following the beautiful Trishuli River for the most part of the journey, you can relish amazing views of verdant hills, swift rivers, and countryside settlements. After arriving in Kathmandu, you will be transferred to your hotel for the overnight stay. Overnight at the hotel in Kathmandu.

Home to many historical monuments, a day without sightseeing is an incomplete day in Kathmandu. You start the day the day by visiting the UNESCO world heritage site Swayambhunath. Enjoy a panoramic view of Kathmandu from the top of the hill where Swayambhunath stands firm and proud. You then drive to Seto Gumba, which lies near to Swayambhunath. There is a beautiful garden in front of the monastery, and from the porch, you can get great views of Kathmandu. Afterward, you visit the Nunnery Gompa where the female monks learn the practices of Buddhism. As the sightseeing tour is over, you drive back to the hotel for the overnight stay.

Today is a free day for you in Kathmandu to spend the day as you please. Today is also an ideal day to go shopping around Thamel and Basantapur areas so that you can take back authentic Nepali gifts you’re your friends and family back home. Do not forget to try some authentic Nepali food as

Day : 20
Final departure from Kathmandu for your further destination.

The time has come to bid you goodbye. Our office representative will drop you off at the airport to connect you with your scheduled flight back home. 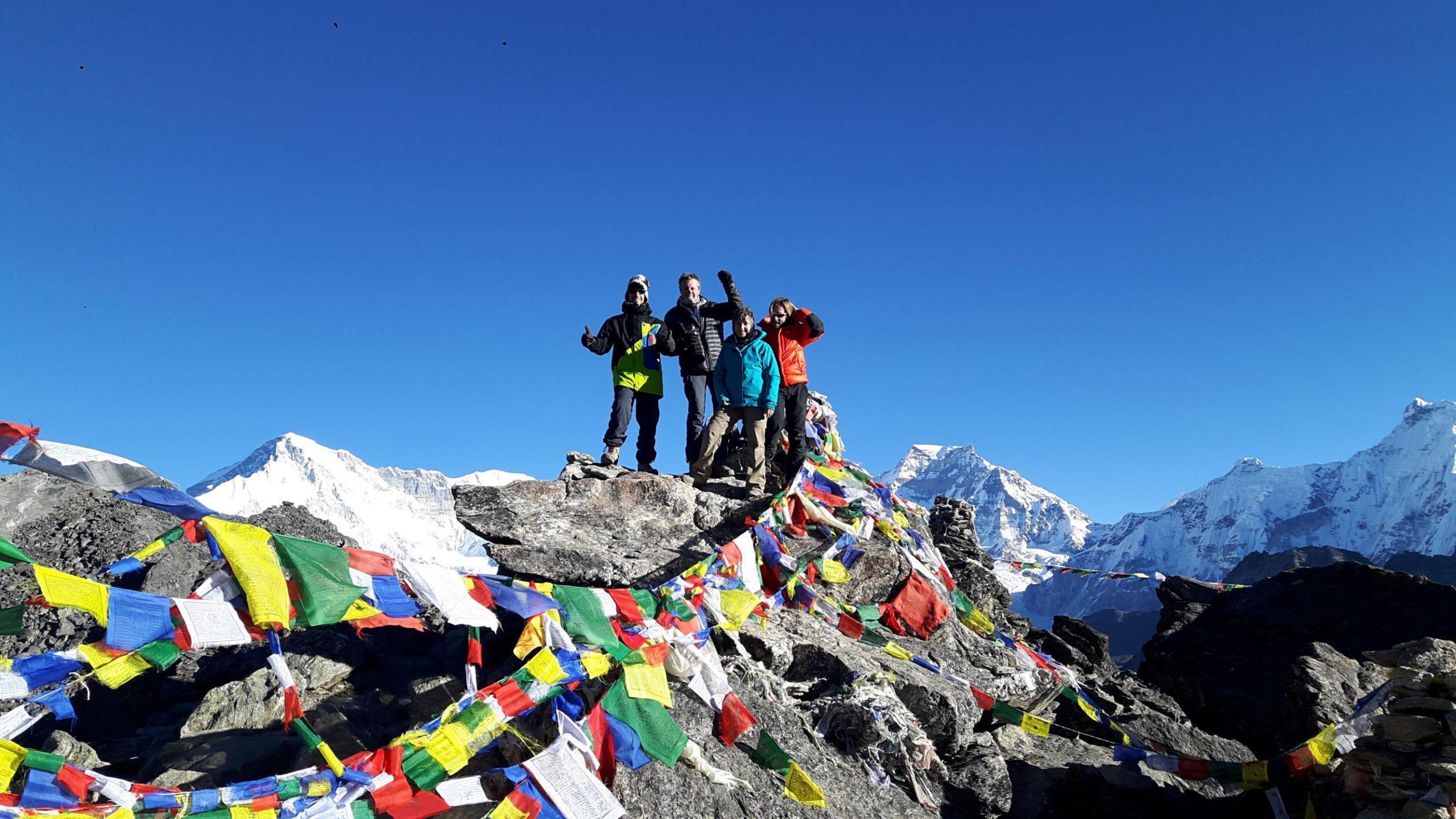